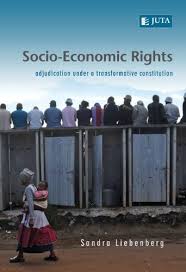 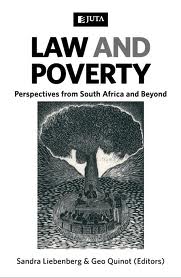 Every so often time and place and effort con- verge to bring about something transformative in law’s promise to justice. And every so often, a discrete book stands in to document, theorize, contextualize, and even help to cre- ate this shift. If South Africa’s entrenchment of justiciable economic and social rights represents such a legal transformation, Sandra Liebenberg’s Socio Economic Rights: Adjudication under a Transformative Constitution has all the makings of such a book.

Of course, South Africa’s post-apartheid Constitution of 1996 has produced a rich literature across many fields of law,1 but this book is distinct in the way that it focuses on the constitutional ambition to realize economic and social rights against a backdrop of endemic poverty and inequality, a theme that is used to orient the broader court-led legal changes that are now authorized and mandated under these provisions.

In these two aspects of its jurisprudence, the Constitutional Court has engaged in a standards-based assessment of economic and social rights complaints, drawing from constitutional and administrative law examples of scrutiny and reasoning, and disparate doctrines from fields such as alternative dispute resolution and labor law.

Under a Transformative Constitution will not tell us whether the Occupy Wall Street or anti- austerity movements will adopt the economic and social rights discourse, or whether such a strategy would likely bring success. It will not tell us whether global efforts to curb growing inequality, within the United Nations human rights system, the Millennium Development Goals infrastructure, the World Trade Organization, or the World Bank and International Monetary Fund, will benefit from a careful adoption of economic and social rights. It will not even tell us whether South Africa’s laud- able constitutional aims will succeed.

Nonetheless, this book certainly provides some informed clues about these questions. For the observers of current fiscal policy protests, Liebenberg’s study of the “struggle for recognition” in chapter 1 is illuminating. In providing the history and context of the inclusion of justiciable economic and social rights in the South African Constitution, from the anti-apartheid struggle to the current apartheid legacy, this chapter emphasizes the social dynamics from which economic and social rights emerge. Indeed, the entrenchment of economic and social rights followed an uncer- tain path, as opposition was taken, for distinct reasons, by commentators on both the right and the left.3 While a consensus towards economic and social rights, as a path to safeguard democracy and equality, emerged, this was not from a straightforward application of the antiapartheid Freedom Charter or the influence of international human rights law. Liebenberg’s delicate treatment of the nonlinear acceptance of such rights is suggestive of the current uncertainties, as well as potential resolutions, of current protest movements.

For the observers of global efforts to address inequality and extreme poverty, her analysis of the innovation of “reasonableness review” provides useful instructions for other adjudicatory or supervisory arrangements, whether for international courts and committees, or for national courts, like those in Latin America, South Asia, and other jurisdictions, which are increasingly embracing economic and social rights.4 The United Nations Committee on Economic, Social and Cultural Rights, in particular, will benefit from the lessons of South Africa as it begins to consider communications under the new Optional Protocol on Economic, Social and Cultural Rights, now ratified by eight State Parties and only two ratifications short of entry into force.5 As Liebenberg presents it, reasonableness review is a judicial approach that combines seemingly transparent criteria with normative flexibility. In asking whether governments have behaved reasonably, the approach inquires into how programs are resourced, how they are coordinated, how they balance short, medium and long term needs, and how they respect human dignity (pp. 151–157). She suggests that this standard of review can provide an answer to the quagmires of progressive realization and non-retrogression, and to the conundrums of the so-called minimum core. Indeed, that the Optional Protocol itself names reasonableness as a relevant standard,6 rather than minimum core obligations or other thresholds, suggests that South Africa’s doctrinal experience will

1 See, e.g., Albie sachs, the strange alchemy of life and law (2009) (a prominent example from South Africa); mark s. kende, constitutional rights in two worlds: south africa and the united states (2009) (an explicitly comparative example).
This has been achieved with close reference to international and comparative law, as required by the Constitution (§ 39), and with an inclusiveness of sources that Adjudication under a Transformative Constitution seeks to document and to emulate.
Substantively, Liebenberg provides a study of the constitutional rights to have access to education (§ 29), children’s rights (§ 28), and detainees’ rights (§ 35). Chapter 5 outlines the main conceptual challenges to the effective operation of these rights (such as the language dimensions of education, or the family’s role in protecting children’s rights), and the Constitutional Court’s current approaches to addressing them. Liebenberg also describes the right to access health care, social security and water (§ 27), through the lens of “reasonableness review,” although she does not entertain the different legal challenges that are raised by these disparate rights and their at times distinctive beneficiaries (and constituencies).2 It is in her treatment of the right to housing and evictions cases (under § 26) that her analysis (like the Constitutional Court’s jurisprudence) signals the greatest development that the constitutionalization of economic and social rights has effected in South African law. Her close analysis of a “new paradigm for evictions law” and of “socio-economic rights in private law,” in chapters 6 and 7, indicates how the right to access housing can change the dynamics of a government’s housing policy, as well as the legal options available for private mortgages, tenancies and property investment decisions.
To those seeking a prediction of whether economic and social rights can provide a solu- tion to increasing inequality and mass pov- erty, this book offers no answer. Adjudication
2 A proposal to separate the application of such rights in South Africa, especially the right to health care, has been made by david bilchitz, poverty and fundamental rights: the Justification and enforcement of socio-economic rights (2007). See also health & democracy: a guide to human rights, health law and policy in post-apartheid south africa (Adila Hassim, Mark Heywood & Jonathan Berger eds., 2007).
Book Reviews 271
4 See, e.g., the edited collections, exploring social rights: between theory and practice (Daphne Barak-Erez & Aeyal M. Gross eds., 2007); courting social Justice: Judicial enforcement of social and economic rights in the developing world (Varun Gauri & Daniel M. Brinks eds., 2008); courts and social transformation in new democracies: an institutional voice for the poor? (Roberto Gargarella, Pilar Domingo & Theunis Roux eds., 2006).
5 Optional Protocol to the International Covenant of Economic, Social and Cultural Rights, G.A. Res. 63/117, UN Doc. A/RES/63/117 (10 December 2008). Its eight State Parties include Argentina, Bolivia, Bosnia and Herzogovina, Ecuador, El Salvador, Mongolia, Slovakia, and Spain. There are 40 signatories (as of May 28, 2012), http://treaties.un.org/Pages/ ViewDetails.aspx?src=TREATY&mtdsg_no=IV- 3-a&chapter=4&lang=en.
6 Id. art. 8(4).
Publicado por Gonzalo Ramirez Cleves en 11:37